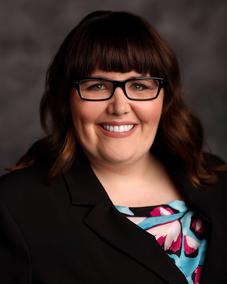 Institute’s Board of Directors on October 1, 2016.  She has been

employed by DRI since its doors opened in August 2009 serving

as Program Administrator and Program Coordinator to several

​As a licensed attorney and mediator, Missy assists in planning and providing mediation trainings, provides pro bono mediations on behalf of DRI, and is on the pro bono attorney roster for Land of Lincoln Legal Assistance.  Additionally, from 2011 – 2013 she assisted Southern Illinois University School of Law with BAR Prep for graduates preparing for the BAR exam.

​​Missy received her Juris Doctorate in 2008 from Southern Illinois University School of Law and licensed in November 2008.  She has completed a 40-Hour Basic Skills and Family Mediation course and numerous advanced mediation trainings.  Additionally, Missy has completed a 10-hour Guardian ad Litem course.  In 2003, Missy received a Bachelor of Science in Social Work from Saint Louis University.  Prior to attending law school, she was employed by the St. Louis City Children’s Division as a Foster Care Case Manager and Specialized Foster Home Licensing Worker.

​In her spare time, Missy is a 200-Hour Registered Yoga Teacher. Her husband, Lee, works in IT in St. Louis, MO.  They live in the metro-east area with their daughter, Grace, and two cats, David and Matthew.​​